Anil Panta, a PhD student in the Department of Physics and Astronomy, is doing research in experimental high-energy particle physics as a member of the Belle II experiment located in Tsukuba, Japan. His primary research focus is to gain better understanding of the matter-antimatter imbalance in the universe by studying CP violation. This complicated process can be measured by studying the decay of hadrons, which consist of combinations of subatomic particles called quarks. Hadrons include three-quark baryons and quark-antiquark mesons. 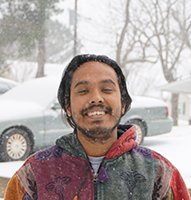 While CP violation has been observed in decays of mesons and baryons containing bottom and strange quarks, and even in mesons containing charm quarks, it has never been observed in charmed baryons. With data from the Belle II experiment, Anil is hoping to shed more light on CP violation in the charm sector and search for indications of physics beyond the Standard Model of Particle Physics. In addition to his analysis of charmed baryon decays, Anil is one of the core developers for the distributed computing software at Belle II. He also provides expert operational support to ensure the smooth operation of Belle II computing, which is distributed all over the world (including here at Ole Miss!) via the “grid”. In 2019, Anil was awarded the Ozaki Fellowship, which provides support for him to travel to Japan and work with experts from Nagoya University on physics and computing research. He was also awarded a summer Research Assistantship by University of Mississippi Graduate School in 2021.

Along with being a physics enthusiast, Anil is also a climate change activist and loves to play soccer.