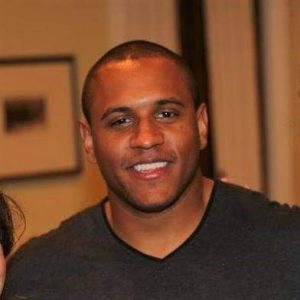 Why did you select physics as your major?
Actually, it’s a funny story. Coming into my Freshmen year, I was trying to decide what “I want to be” when I grow up. At this time, the show MythBusters had just started. It was the only show of educational substance I could watch and actually enjoy during my teenage years. I just knew I had to be on this show, but it seemed like they were skilled at everything. There was theory and application with everything they did. Not only that, but the scope of topics covered spanned many disciplines from engineering, design, electronics, programming, EXPLOSIONS!  The only thing that covered such a breadth of topics with both theory and application was physics.

What are some significant/favorite memories from your time at UM?
Some of the coolest memories I have are of everything we did during optics labs. How can you not enjoy playing with lasers and creating holograms?  But the most significant one is the day I was sitting in Dr. Summers class and I had an “ah ha!” moment where I thought I slightly, kind of, maybe, understood Quantum Mechanics.  To this day, I still have interesting debates with people on the merits of the Copenhagen interpretation vs the “Many Worlds” theory.

Please describe your educational and career trajectory since graduation from UM.
Unfortunately, MythBusters missed out on the opportunity to cast me when they failed to email me back. So, I had to get a real job.  I worked the better part of a decade in the oil and gas industry working as a petroleum engineer. I travelled the world doing private consulting on oil rigs. I was anywhere between the North Slope Alaska, to offshore Gulf of Mexico. Because of my physics background, and the industry’s use of nuclear sources, I even became a certified Radiation Protection Specialist. I was in charge of actual nukes on site. We primarily used Americium-Beryllium for neutron emission, and Cessium-137 for its gamma radiation.

Following that adventure, I worked in Germany for 2 years in R&D. During that stint, I went back to school and got a MSc. in Computational Analytics from Georgia Tech and transitioned into a Data Scientist and Machine Learning role. From that role I learned many new concepts in the tech space such as cloud computing and multi-threaded programming. After about 3 years I have since transitioned to my current role as a Senior Software Engineer at Google where I work on the videoconferencing product “Google Meet”.

What do you think is the value of studying physics in today’s world?
It doesn’t aim to give you the gift of ubiquitous knowledge. Instead, it fosters the ability to think critically and assess any situation, scenario, or environment. More importantly it doesn’t just teach you answers. It teaches you how to ask the right questions, which is key for any role in life. This is because no problem can be truly solved until the right questions are asked.