About the High Energy Physics Group

The goal of High Energy Physics is to understand the fundamental forces of nature. These forces govern the interaction of matter and energy. The UM high-energy physics group is dedicated to the study of the most fundamental physics phenomena.

We are interested in various areas of particle phenomenology. We are working mostly in flavor physics but recently we have extended our interests to included topics in non-standard Higgs interactions and dark matter physics.

There is a huge amount of data from flavor experiments. The B factories at BaBar and Belle have made many measurements in Flavor Changing Neutral Current Processes (FCNC) which are known to be very sensitive to new physics effects and new sources of CP violation which is required to explain the matter-antimatter asymmetry observed in nature. Most extensions of the Standard Model (SM) contain new CP violating phases which do not have to be small as CP is not an exact or approximates symmetry of nature. Hence, discovery of non-SM CP violation phases is not unexpected. One of the main research interests is to analyze data from current and future B physics experiments to find evidence for new physics and to find the nature of this new physics.

We are interested in the non-standard couplings of the Higgs to SM particles. We are involved in the study of the production and decays of additional Higgs bosons in various extensions of the SM. Finally, we are working on building models of dark matter to explain recent data from dark matter experiments. 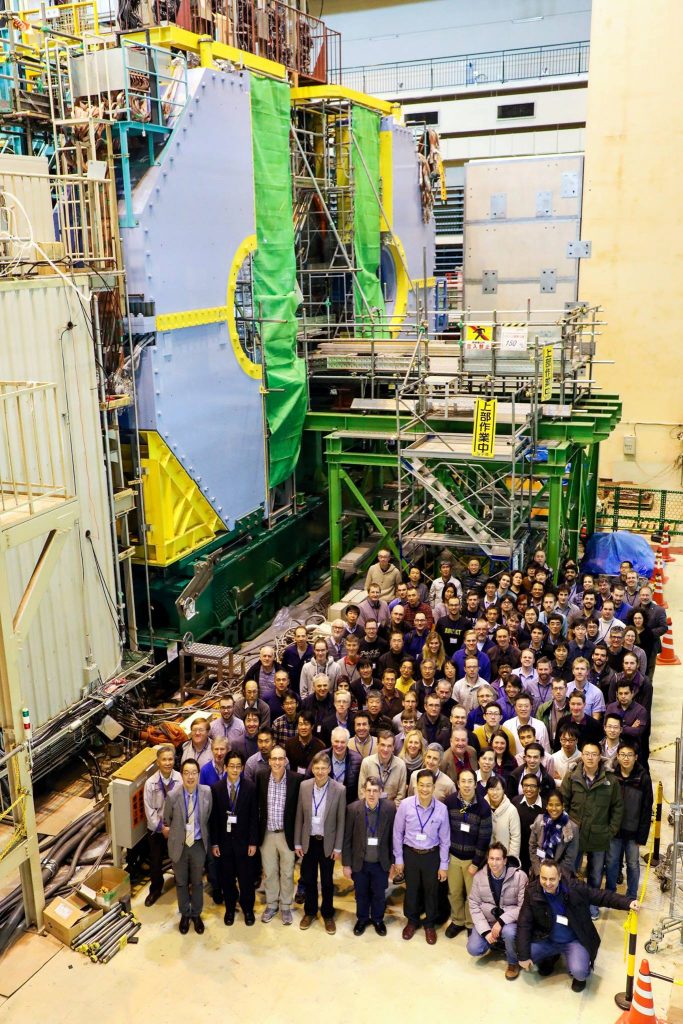 Matter and anti-matter are thought to be created in equal abundance. Yet in the universe, matter is dominant over anti-matter. CP (charge-parity) violating effects within the fundamental forces are thought to have caused this particle over anti-particle asymmetry. The Belle II experiment is dedicated to the study of CP violation in theB-meson system. The goal is to see if beauty quarks decay differently from anti-beauty quarks. Our measurements are expected to be important in explaining why we now have a matter universe.

The Belle II experiment at the SuperKEKB collider is a major upgrade of the Belle experiment at the KEKB asymmetric e+e– collider at KEK in Tsukuba, Japan. SuperKEKB is an asymmetric B factory (that is, it producesB mesons copiously at a high relativistic boost by colliding beams of electrons and positrons of unequal energy). The University of Mississippi group is playing a role in the construction, commissioning, and calibration of the on the imaging Time-of-Propagation (iTOP) detector. This subdetector of Belle II will perform an integral role in Particle identification (PID). We will engage in the studies of B-meson decays and CP violation. 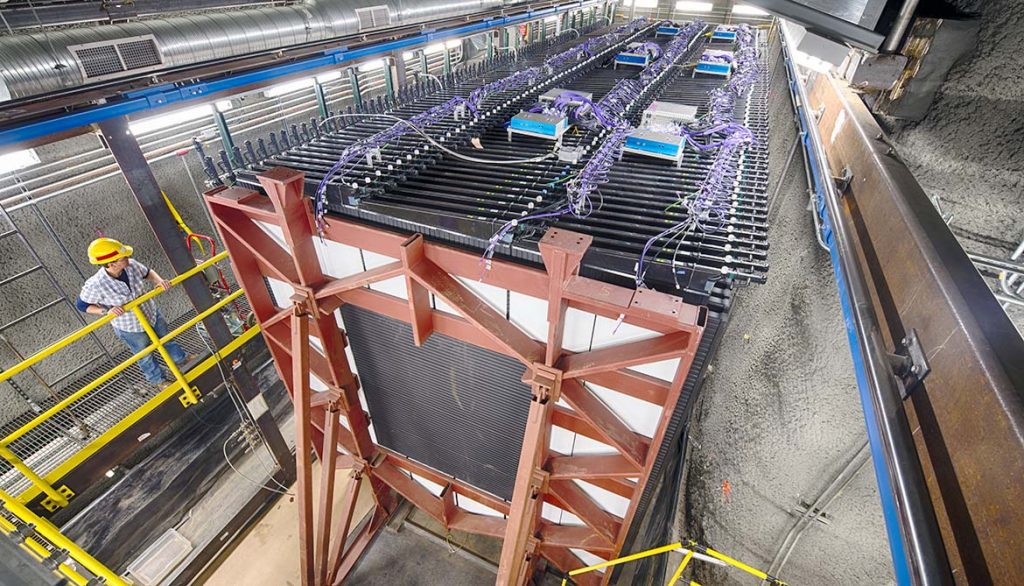 The near detector of the NOvA experiment at Fermilab. Photo courtesy of FNAL.

The NOvA (NuMI Off-axis νe Appearance) experiment is shedding light on one of nature’s most elusive particles: neutrinos. Since the late 1990s, physicists have known that neutrinos exhibit a quantum mechanical behavior called oscillations. But this behavior is not predicted by the Standard Model of particle physics. NOvA is working to better understand these strange particles through precision measurements of their oscillation properties. 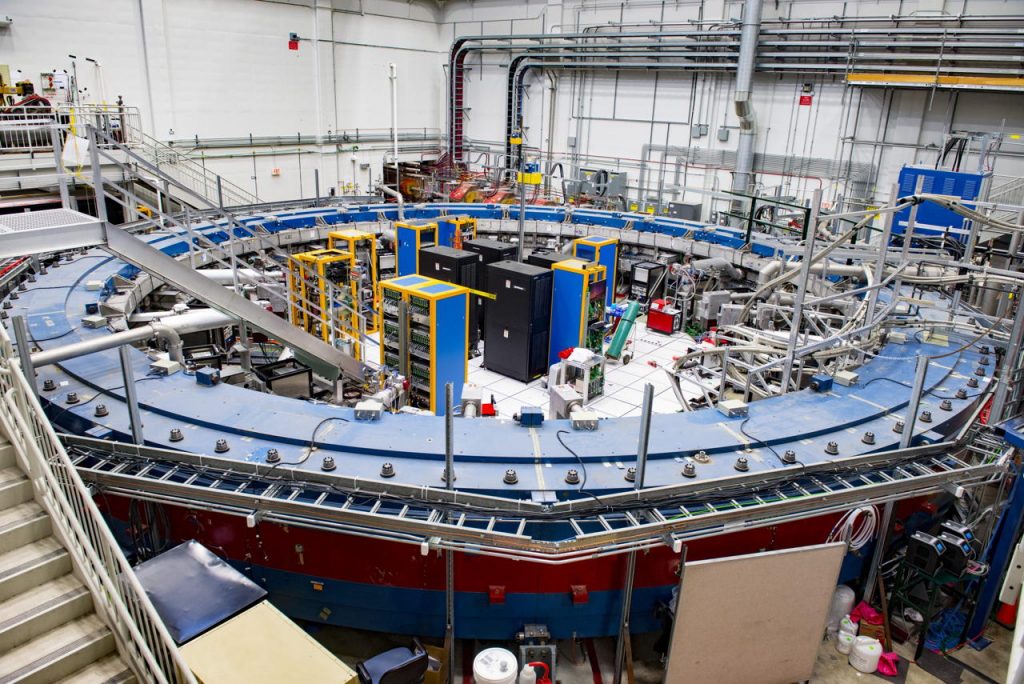 The Muon g-2 experiment at Fermilab is a major upgrade of the previous version of the Muon g-2 experiment, which ended data taking at Brookhaven National Laboratory in 2001. The measurement of the anomalous magnetic moment of the muon provoked world-wide interest because of the tantalizing evidence of deviation from the standard model. This experiment reuses Fermilab’s accelerator system and the storage ring from the original BNL experiment. It is expected that this g-2 measurement will have a four-fold improvement in the final uncertainties compared to the previous result. This includes both an improvement in collected statistics and in the systematic uncertainties of the measurement.

The University of Mississippi’s High Energy Physics group’s at the Muon g-2 experiment includes work on the Cherenkov counter. This subdetector of Muon g-2 will perform an integral role in Particle identification (PID) of the particles in the beam. During commissioning, the Cherenkov will be used to verify the particle production rates immediately after the target, and the muon beam purity immediately prior to injection into the storage ring. Dr. Breese Quinn has been in charge of the Cherenkov detector’s commissioning.

The MICE Experiment at RAL near Oxford, UK: Dr. Cremaldi 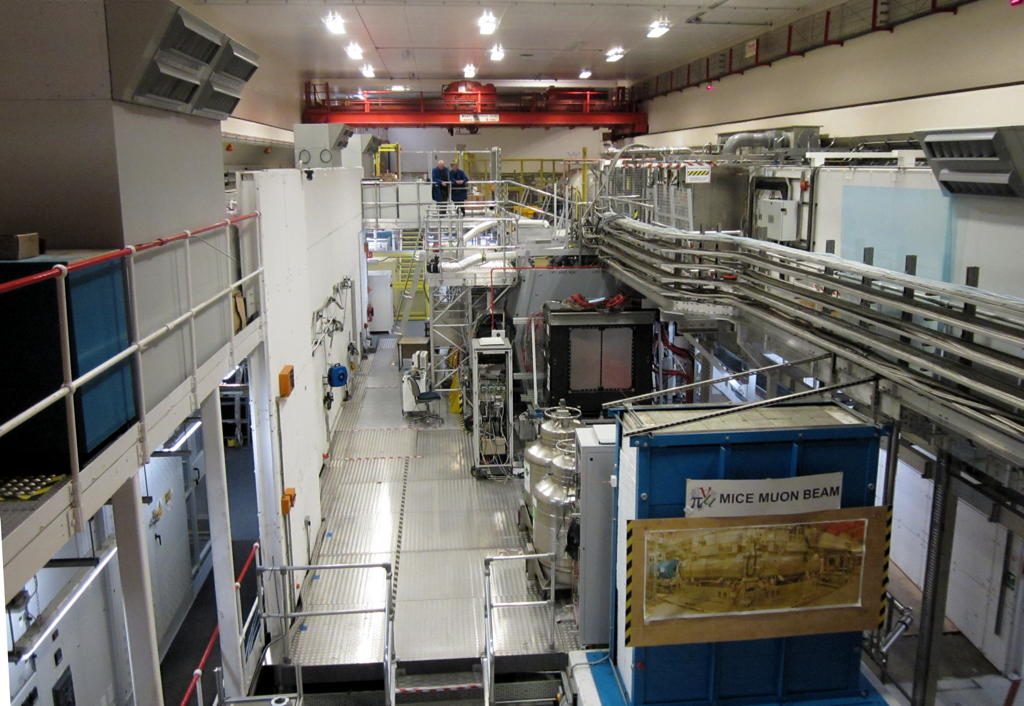 The Muon Ionization Cooling Experiment (MICE) is an important milestone towards a Neutrino Factory. The neutrino factory is a completely new type of accelerator and offers many new challenges. Probably the largest novelty from the point of view of accelerator physics is ionization cooling. MICE was carried out at the Rutherford Appleton Laboratory (RAL) near Oxford in the United Kingdom.

The University of Mississippi has worked with physicists from two dozen universities and national labs to first design a neutrino factory with a muon storage ring and then a ring to collide muons head on. The neutrino factory can produce the quantity of neutrinos needed to study the puzzling neutrino mass. With muons being about 200 times more massive than electrons, a low energy muon collider will allow direct production of the Higgs boson, the particle responsible for giving mass to all other particles.

Our group has fabricated new types of radio-frequency cavities for muon acceleration, built ultra-thin containers for liquid hydrogen to provide ionization cooling of muon beams, and a polyethylene wedge as an alternate method of providing ionization cooling of muon beams. We have worked on magnet designs for a fast-ramping acceleration ring and on alternating gradient magnets with a short-lattice spacing for a dogbone geometry accelerator. We are developing parallel Linux computing code to simulate cooling muons into small bunches making them easier to accelerate and to collide. 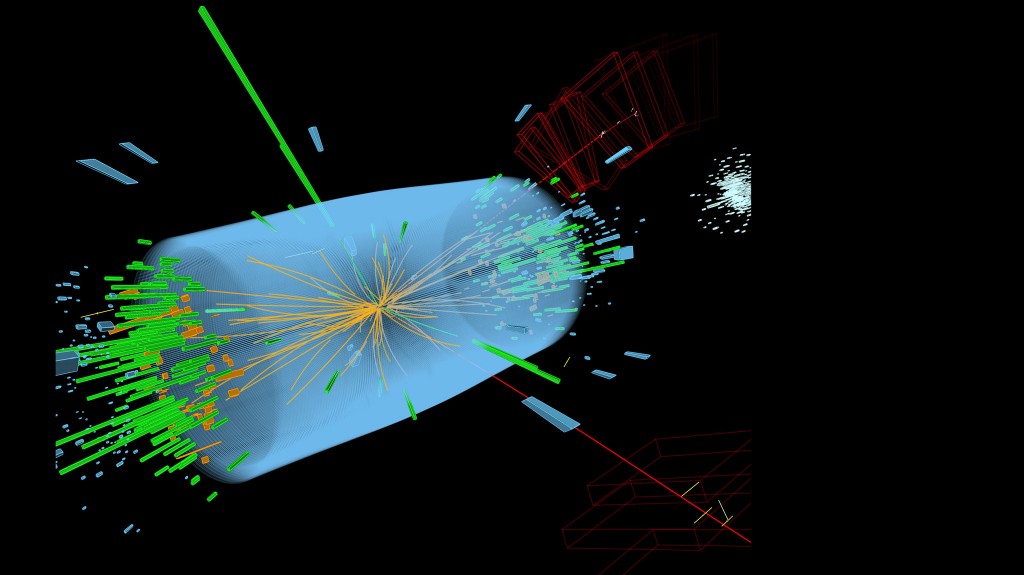 Event recorded with the CMS detector. The event shows characteristics expected from the decay of the Standard Model Higgs boson to a pair of Z bosons, one of which subsequently decays to a pair of electrons (green lines) and the other Z decays to a pair of muons (red lines). Photo courtesy of CERN.

The Standard Model now explains all of particle physics phenomena to great detail below 200 GeV. But particle physicists are studying collisions in the TeV energy regime at CERN’s Large Hadron Collider (LHC) to search for violations of the model. The LHC, located at CERN near Geneva, Switzerland, has collided protons at 8 TeV and at 13 TeV, in the center of mass. The CMS detector is one of two large experiments that are constructed to investigate the collisions in that led to the discovery of the Higgs particle, and in searches for supersymmetric particles, and other non-Standard Model phenomena.

The high-energy physics group at The University of Mississippi, along with other U.S. and international groups, participated in the design and construction of the CMS experiment. We have worked on the hadron calorimeter, which measures the energy released in the violent collisions, and provide a trigger for rare phenomena. We have also worked on a pixel-tracking detector able to determine the precise origin of particles in the interaction to 30 micrometers. This fine-grained tracking is decisive in distinguishing rare events from normal background interactions. The experiment began running in 2009. 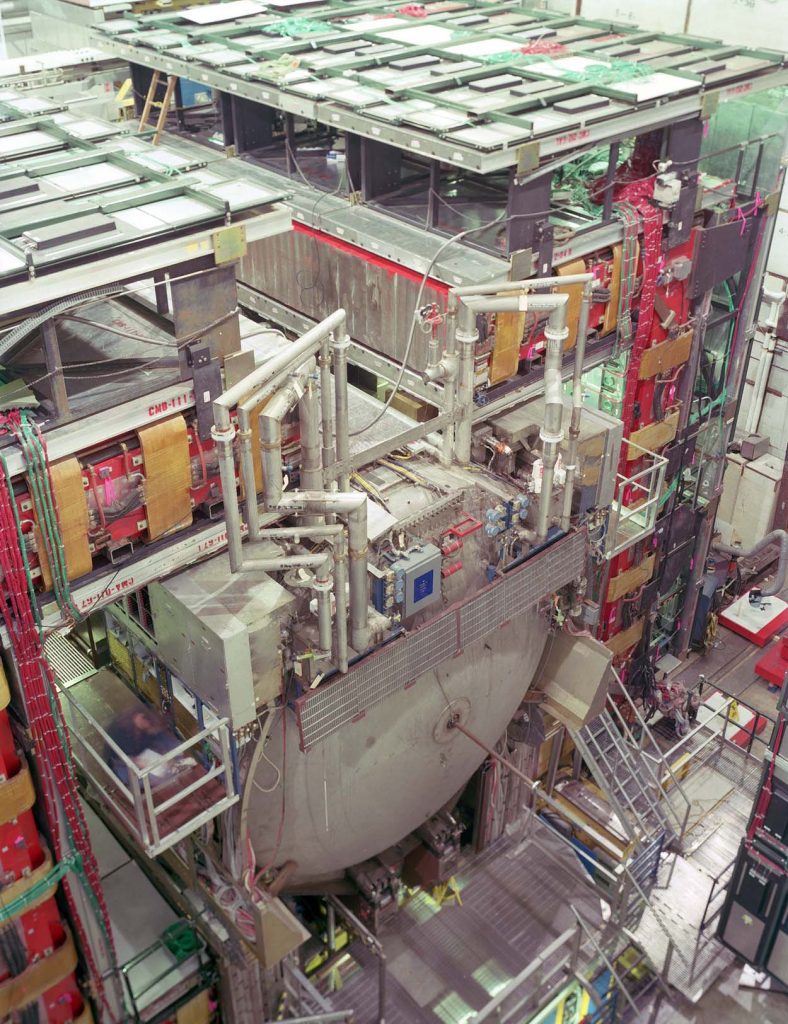 The DØ detector at Fermilab. Photo courtesy of FNAL.

In 1995, the top quark was discovered by the DØ and CDF experiments in a sample of about 100 events collected during the Run I data taking at Fermilab’s Tevatron collider. The top quark immediately stood out from the other fundamental particles due to the fact that it is much more massive than any of the others. DØ has completed of Run II, during which the experiment recorded thousands of top events. From this data set, many properties of the top quark have been measured, which  yield insight to the origins and nature of mass.

DØ was a collaboration of almost 700 physicists from more than 80 institutions in 19 countries. The experiment used a 5000 ton detector to observe millions of interactions each second at the world’s most powerful particle accelerator. In addition to top quark events, scientists searched through this copious data for many other things such as signs of extra dimensions and the Higgs particle, which isresponsible for mass generation. The University of Mississippi group has been heavily involved in the installation, commissioning, and operation of the Silicon Microstrip Tracker which is used to precisely measure the location of particle interactions and decays. This information was crucial for identifying the secondary decays of b quarks which are characteristic features of top quark events.