Our Buildings and a little of our History

The current home of the Department of Physics and Astronomy is Lewis Hall, completed in 1939. The building is named for Dr. Arthur Beverly Lewis, whose career at The University of Mississippi began as a physics undergraduate student in 1919 and continued as a physics professor from 1936 to 1969. Dr. Lewis was Chair of the Department from 1953 to 1957 and Dean of the College of Liberal Arts from 1957 to 1969. He donated his collection of Physics Abstracts, a journal with articles spanning much of the development of high voltage physics, to the department in 1998. The 40 years-worth of bound journals can be viewed in room 228, along with a reprint given to us by Dr. Lewis of the National Bureau of Standards Research Paper “Standard Electrodynamic Wattmeter and AC-DC Transfer Instrument” by J. H. Park and A. B. Lewis. Dr. Lewis died in May 2000, at the age of 98. He will be missed by all who knew him.

Lewis Hall, viewed from the Lyceum.

As you enter Lewis Hall from the door at the left (east) side, the department office is the first door on the right (room 108). There, hanging above in the hall next to the department office, on the right is a portrait of Dr. William Lee Kennon, painted by his son. In the portrait Kennon holds a copy his book Astronomy: A Text Book for Colleges that was published in 1947.; The edge of Kennon Observatory’s main copper dome is visible at the far left of this photo.

Lewis Hall, viewed from the north.

Dr. Kennon was instrumental in securing the funding for Lewis Hall and Kennon Observatory. Lewis Hall was one of the last constructions of the Works Progress Administration set up during the Great Depression. Today, Lewis Hall houses lecture rooms and laboratories for courses in physics and astronomy. Many faculty members in the department have offices here, while others have their offices on the south side of campus in the National Center for Physical Acoustics. In 1995, a research wing was added southward from the southwest corner of Lewis Hall. 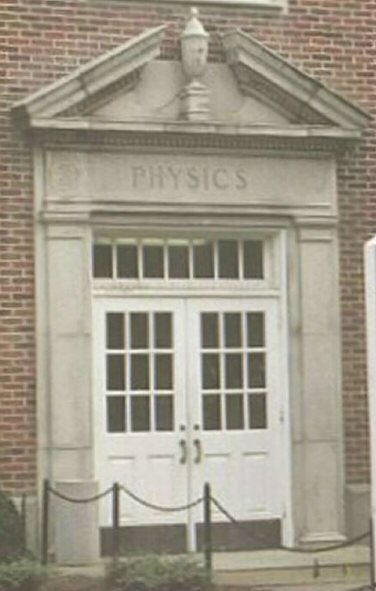 A portrait of Dr. Lewis hangs above in the hall opposite the Physics Department Office, on the left after you enter through the door at the left (east) side. Although the building was completed in 1939, it was not named ‘Arthur Beverly Lewis Hall’ until 1977, as was then directed by the Board of Trustees of the Institutions of Higher Learning. From 1939 to 1977 it was known simply as ‘the physics building’. 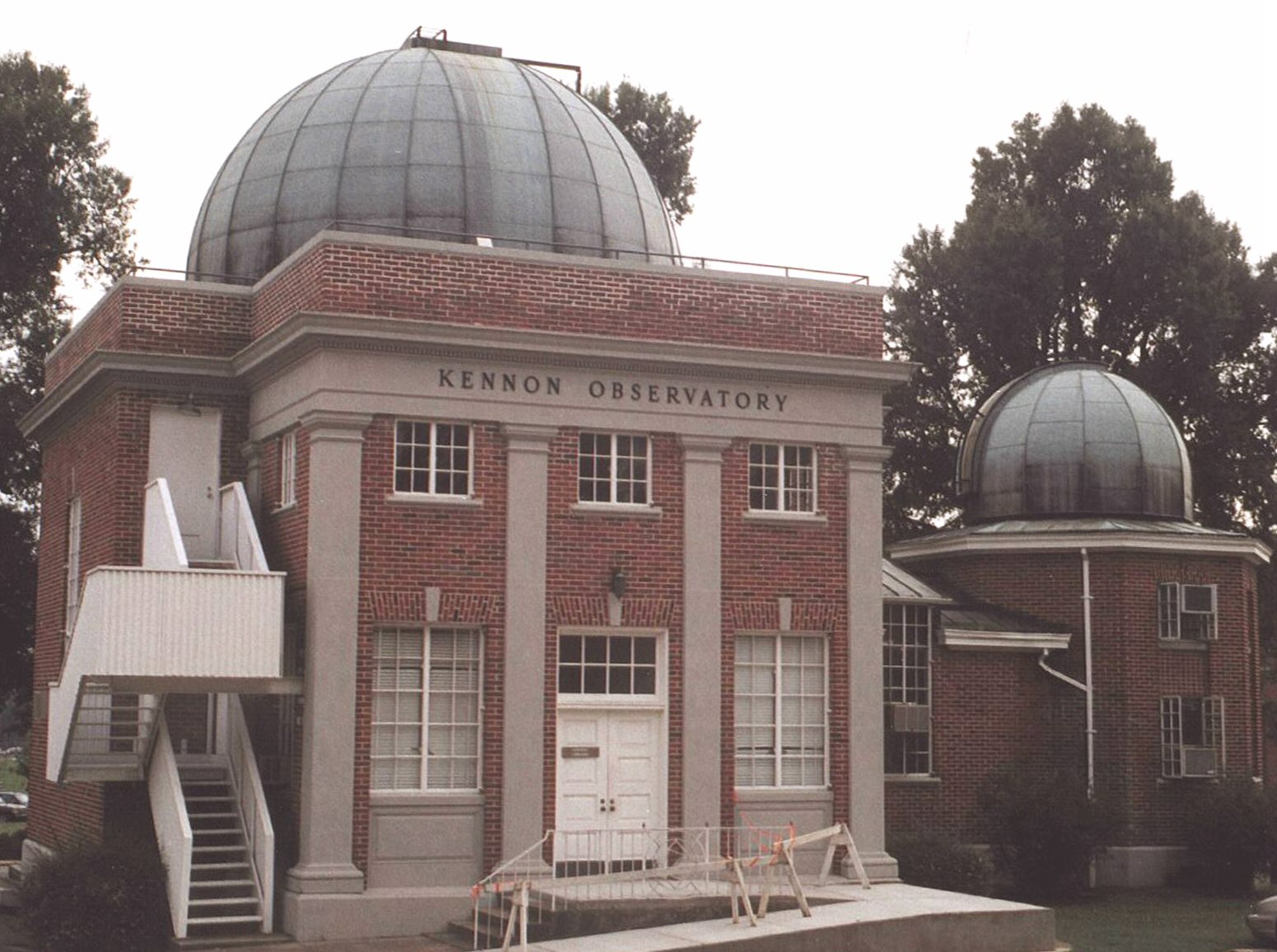 Kennon Observatory, from the back.

Kennon Observatory, conceived by Professor William Lee Kennon, was completed in 1939. Two copper-roofed domes were included to accommodate two different instruments a fifteen inch telescope, with co-aligned visual and photographic telescopes, was moved into the bigger dome, while the smaller dome housed a five inch telescope that had been acquired by F. A. P. Barnard in about 1856. The design in the railing in front of this entrance (behind the ramp seen in this photo, which has since been demolished to facilitate the bus terminal in the Kennon Loop) illustrates the Pythagorean Theorem; its use as a decoration for the department dates back to the design of the observatory. This motif was also used in the staircase railings of the addition to Lewis Hall. In 1997, the department refurbished the Little Dome and the octagonal room of Kennon Observatory. 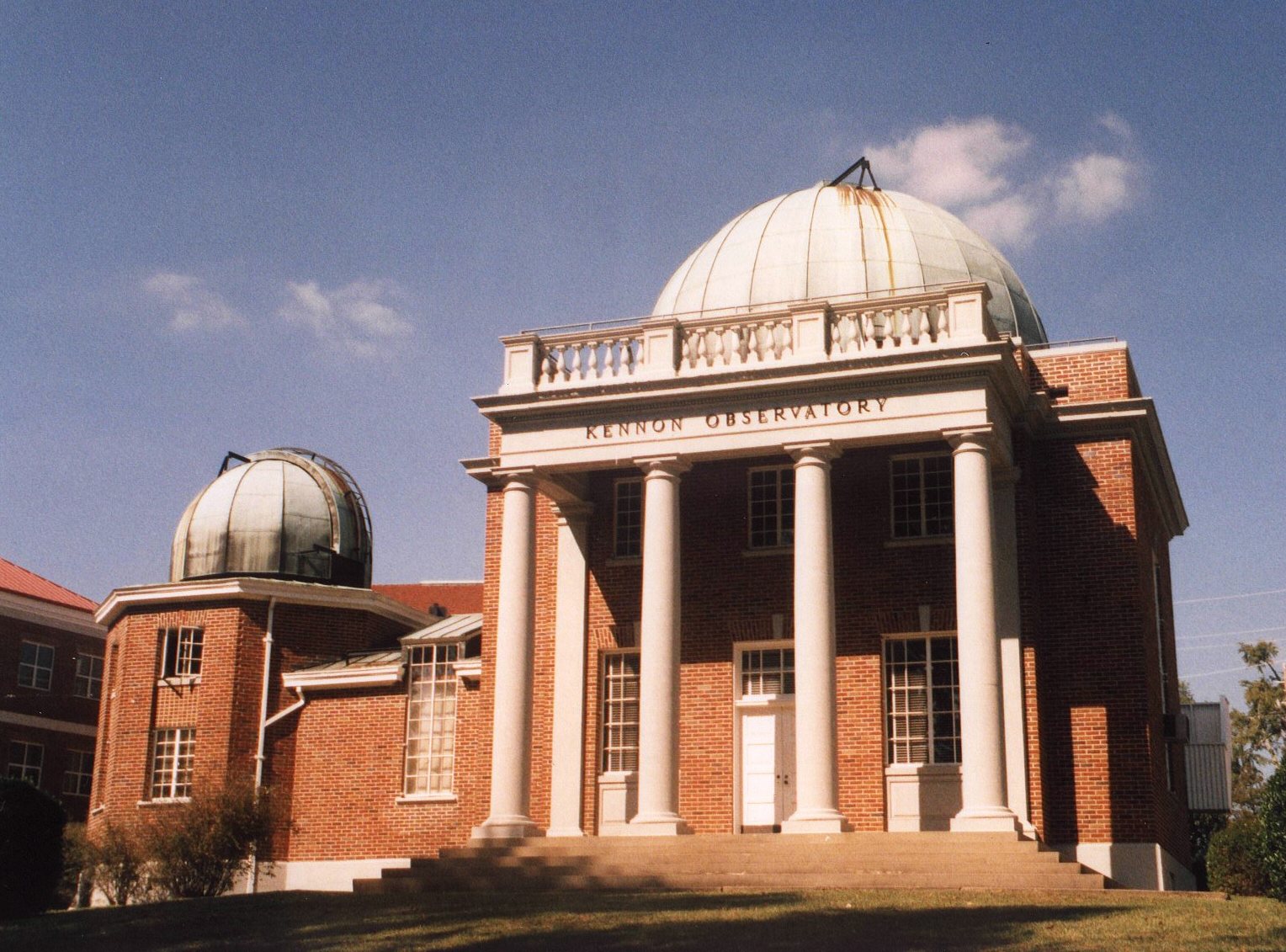 This, the main entrance of the observatory, faces due south, and the building is precisely aligned east to west. A small tube in the south wall is oriented such that direct rays of the sun shine through it to the floor only twice a year, at noon on the vernal and autumnal equinoxes. The slanted metal roof of the transit room (between the main and small domes) was designed to open for observations using a three inch meridian telescope. 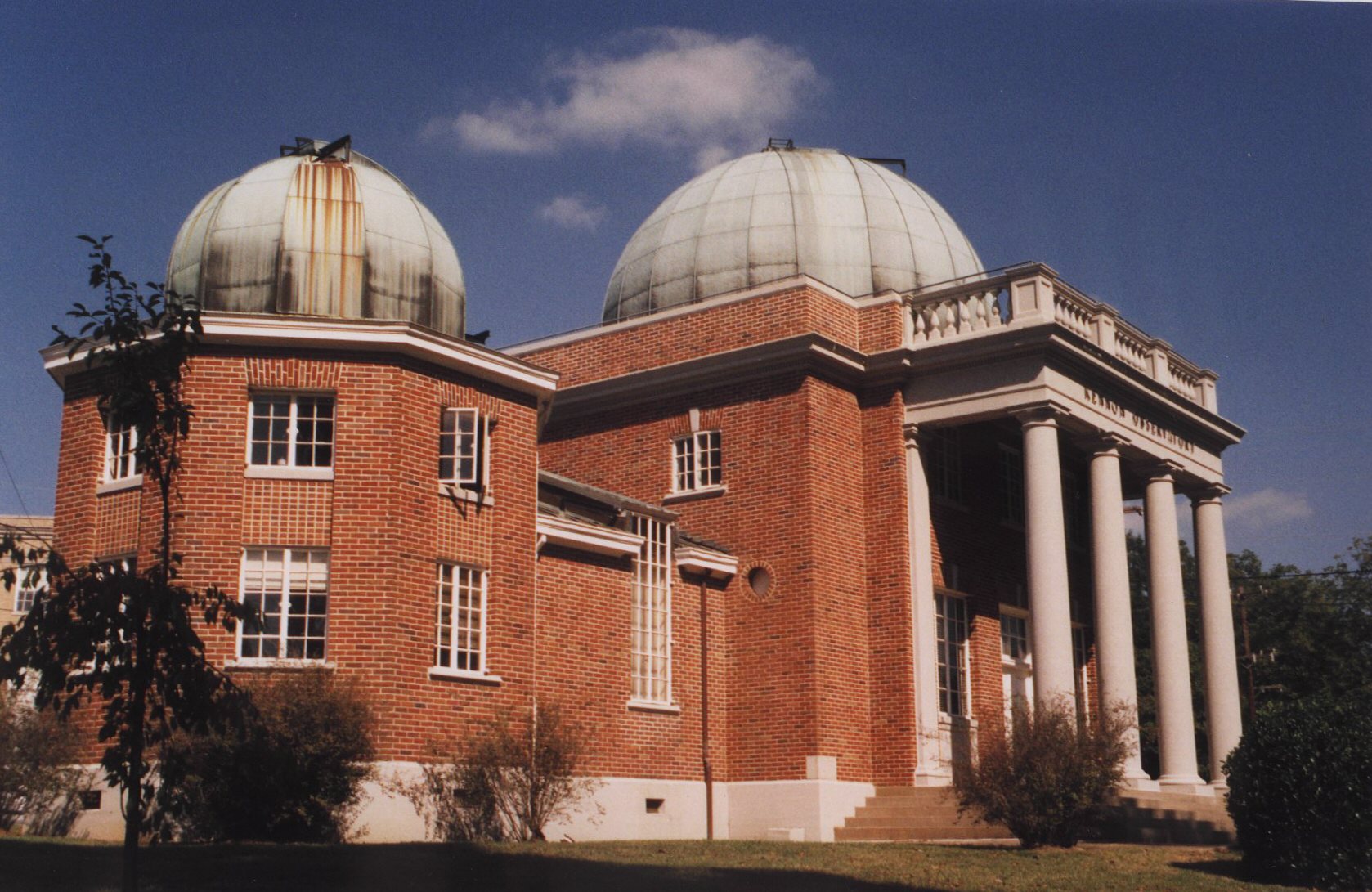 The untimely death of Dr. Kennon in 1952, after 41 years of distinguished service to the department and the university, prompted the Board of Trustees to name this the ‘William Lee Kennon Observatory‘ Dr. Kennon was Chair of Physics and Astronomy for 40 years. He was popular with and respected by students and faculty alike. His influence is still felt throughout the department — his careful planning of the physics buildings, his successful efforts to attain funding for new demonstration and laboratory equipment, his commitment to the growth of the curriculum, his nurturing of the students — all these things are Dr. Kennon’s legacy.

Note: The images included on this page are copyrighted by the photographer, Maribeth Stolzenburg. Copyright © 2000