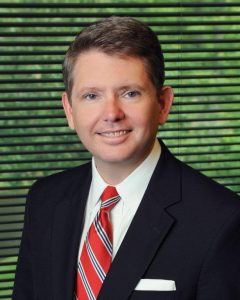 Trey Dellinger has had a distinguished career in politics, law, and public service, which he built upon his scientific training, specifically physics. After graduation from UM School of Law, he became the Vice Chairman of the Alcorn County Republic Party then member of the State Executive Committee of the Mississippi Republican Party. He was also Chairman of the Government Affairs Committee of the Madison County Business League & Foundation where he led efforts to liaison with government officials on behalf of Madison County.

Dellinger joined the law firm of Wells Marble & Hurst, PLLC, where he practiced for nearly 17 years. He then moved to the State Director of the non-profit, Americans for Prosperity. After a year in that position, Dellinger became the Chief of Staff for the Mississippi House Speaker Philip Gunn’s office in 2020.

Mr. Dellinger was interviewed recently as an alumnus of the UM Department of Physics.

When and why did you choose to major in physics?
People often ask me how I went from physics to law school and beyond. Some initial reactions have been, “gosh, wasn’t that a waste of a physics degree?” However, I would not change anything at all.

I was convinced from the 6th grade forward that I wanted to study physics. When I was young, Carl Sagan’s Cosmos program was a big thing on PBS. I was fascinated with science from an early age and devoured everything on PBS. I was always active in science fairs, and was usually one of a few students in the physics category of the science fair! Thus, I pursued physics at Ole Miss.

What are some favorite memories from your time studying physics at UM?
I participated in a summer internship with the High Energy Physics group from Ole Miss at Fermilab, the National Accelerator Lab near Chicago. It was probably one of the best experiences of my life. I got to meet scientists and students from all over the world.

At Fermilab, the detector was located next to a large magnet, bigger than my office. The magnetic field would obscure the test results on the accelerated protons, so my job was to maintain a series of coils that counteracted that magnetic field.

What words of advice to you have for a student who is considering the major in physics?
If someone is uncertain about choosing a physics major because they are unsure about a research career or worry that it is a narrow degree, I would say that is not a concern.

First, a physics degree establishes instant intellectual credibility. Life is a competition, so you have to separate yourself from the competition. Therefore, reframe your idea about physics. You are getting a degree that makes you stand out from the crowd. If you have a degree in physics, others will know that you came every day to work. It is a degree of innate, intellectual ability, and also a commitment to work.

Third, I have found most people who go into the legal field from the humanities are accustomed to advocacy; they’re advocating for a point of view. In contrast, those in physics are accustomed to being objective. Being able to state your case and prove your case with data from an objective point of view becomes second nature. Your only job in physics is to find the truth through the scientific method. I think more like a scientist than I do like a lawyer in many, many ways. After all, science is not a body of knowledge, but a way of thinking. That pattern of thinking will really help anybody regardless of their career.

Fourth, in my legal career, I regularly confronted situations where a science or technical issue would come up in a case. My firm would seek out my assistance because I understood the issues. Other lawyers who majored in different disciplines before law school simply didn’t really have the tool kit, so I had an advantage at my firm. I would never have a shortage of work!

Here is a specific example of where my math and reasoning skills gained in my physics degree assisted me as Chief of Staff. Last year we had the largest income tax cut in state history. As the Chief of Staff and Chief Policy Advisor to the Speaker, I was tasked to help draft legislation to eliminate our state’s income tax, which is one-third of the state’s revenue stream. This involved getting our arms around the budget. I had to engage in the verbal reasoning skills but also put together spreadsheets and formulas to calculate what an incremental change each year would do to state funds. I had to essentially create a mathematical model to forecast the impact of changes to the state’s tax structure. If I did not have my math training, I would not have been able to do that.

The physics major really does give you a grounding and a capacity that other people won’t have. It’s difficult. I won’t pull any punches. If you are a physics major, you’ve got to be willing to work. You have to be willing to plant yourself in a chair and understand the material. But your work will be rewarded; it will make you stronger, faster, and better than a lot of your competition.

Why did you make the change from a legal career to public service?
Before I entered law school, I was always very interested in public policy. It was always in the back of mind, but the “right moment” to enter public service never arose. Also, when you are a young man with a family and building a law practice, 15 or 20 years goes by awfully fast.

When my son entered Ole Miss and, praise the Lord, got a full scholarship, it opened up some opportunities for me. A friend of mine was promoted from state director to the national office of a non-profit policy group. He offered me the state director position because I had a passion for those issues. I did that for about a year. Then, the [Mississippi House] Speaker’s Chief of Staff returned to the private sector, so the Speaker reached out to me for that position. He was getting ready to tackle the income tax redesign, so he thought I would be a good fit for that task.

I was walking up to the podium to make a speech for the non-profit when the Speaker called me with the job offer. I said, “Let me give this speech and I will be right with you!” That was a great opportunity. The Lord opened the door, and I was happy to jump through. I’ve loved this job better than anything I’ve ever done. I wish there were more of these jobs because it is very, very rewarding.

Please tell us a little about the position.
We have five total staff members here for the Speaker of the House. Mississippi, unlike other states, does not have legislative staff other than the Speaker’s office staff. We have committee assistants for each member. We’re the Speaker’s staff, but, to a degree, we function as a policy-generating shop for the House as a whole.

I will leave you with one more anecdote. About a week ago one of our House members called me at home to ask me to help him with his kid’s math homework. See, you never know where a degree in physics is going to help you!